It’s time to have a serious talk, folks. We all understand that our cell phones are very important to us.  Our friendly debates get settled by an instant search on Google.  We post highlights of our day on Facebook and Instagram.  Some of us can’t even go to the bathroom without it.  Can you remember the last time you went one day without ever touching your phone?  However, even though our phones are so integral to our lives, don’t be stupid. You don’t want to end up in the headlines like some these dummies: 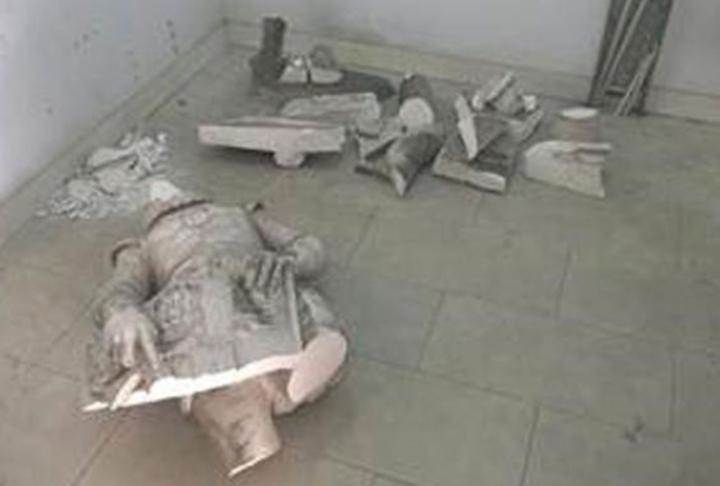 This is why we can’t have nice things.

A man simply wanted to take a picture with the statue of Dom Sebastiao, who was the ruler of Portugal in the 16th century, and taking a picture next to him would be the ultimate selfie.  However, the statue sat atop a pedestal, 8-feet off the ground, and was unsecured.  As he tried to scale the pedestal for a close-up, he toppled Dom Sebastiao over, smashing the work of art into dozens of pieces. To make matters worse, he attempted to flee the scene, but was later apprehended by authorities.  He will face a judge at a later date.  Officials say there’s the possibility that the statue may not be repaired due to the extensive damage.  Poor Dom Sebastiao, he was happily greeting all passengers at the entrance of Lisbon’s Rossio train station since 1890, and it all came to a crashing end because of a selfie.

Talk about needing to set privacy controls on your phone! A man visited a thrift store and paid 50 cents for an used Blackberry cell phone. When he got home, charged it, and turned it on, he was shocked to find it was full of emails and contact info of famous athletes and celebrities, from hockey-great, Wayne Gretzky, to NBC news anchor, Tom Brokaw. Turns out, the phone once belonged to Dave Checketts, general manager for NBA’s Utah Jazz from 1984-1990 who lost his Blackberry over 10 years ago. Thankfully, the man who bought the cell phone had no malicious intentions and planned to return the phone to Checketts. So, if you’re reading this and you do not have privacy settings set on your cell phone – do it now!

You think dropping your cell phone in the toilet is bad? Think again! A woman in China accidentally dropped her phone into a cesspit (that’s an open-pit toilet), so her husband jumped in to try to save it.  However, the man was overcome by the stench and fumes, and lost consciousness in the knee-deep filth.  In a panic, the husband’s mother jumped in to try to save him, but she also fainted.  The husband’s father, immediately called for help from the neighbors, but despite their rescue attempts, both the woman’s husband and his mother died due to suffocation.  The tragedy all unfolded within 5 minutes!  The phone was brand-new and cost around $320.  Next time you drop your phone, be it a sewer, river, hole… remember this story, and stop to realize that your life is worth more than a cell phone replacement!

Plus, while we here at Digital Doc are in the cell phone repair business, a phone dropped into a cesspit might be recovered by our phone water damage repair.

Despite recent advancements in cell phone technology, smartphones still gobble up battery power, so we have to keep them plugged in often (so much for cordless phones, huh?). Please, PLEASE, realize that there is a potentially deadly electrical current running through your charger, and as such, you must keep it away from anything that can pose a danger, like flammable objects or water.  Earlier this year, a 14-year-old girl went to take a bath, and in trying to charge her cellphone, she electrocuted herself as the charger fell into the water.  Her mother discovered her daughter’s body too late.  Explain to your kids that all electronics should be kept FAR AWAY from water.

People Who Don’t Silence Their Cell Phones Get Called Out

On a lighter note, you know how you’re warned to silence your cell phones before watching a movie in a theater, before a meeting, or before class in school? People still miss the memo, and even get chewed out for it:

“We have forgotten our public manners,” laments Patti Lupone. She’s right: There’s nothing more irritating than someone else’s phone going off as you’re really getting into a movie, or trying to listen to a speaker.  We need to make it a habit, lest it become such a nuisance that more venues start installing mobile-phone jamming devices that make it impossible to make or receive calls.

So, dear reader, after reading these stories, please remember: You have a smartphone – don’t be the dummy.